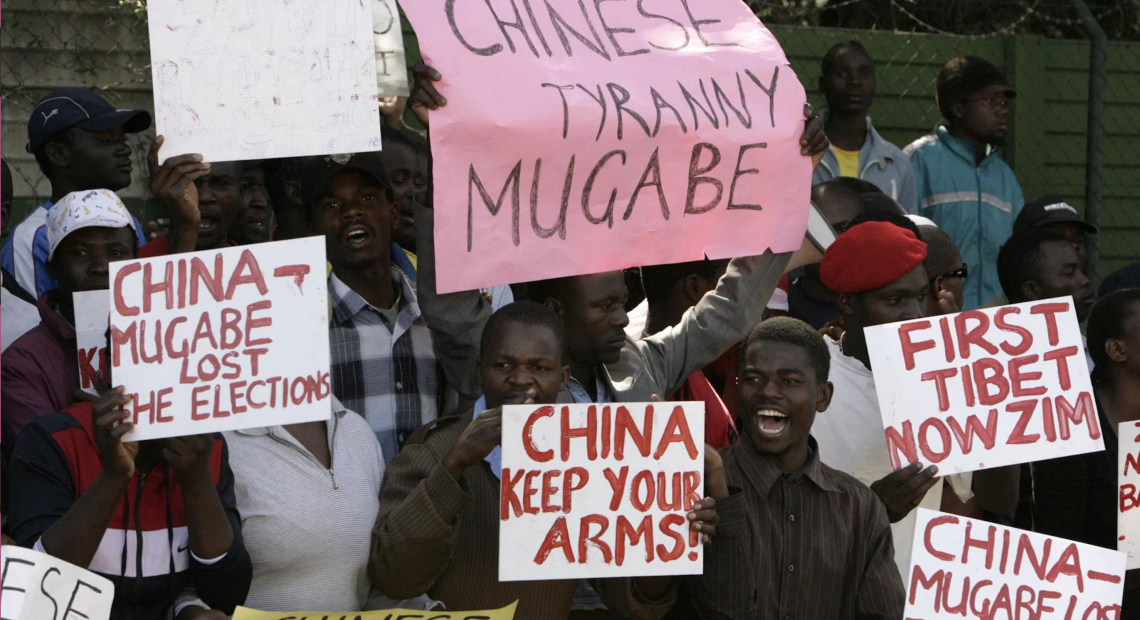 Although China has officially denied involvement in the recent coup, it has cultivated deep ties with Zimbabwe’s political leadership since the 1960s-70s Rhodesian Bush War. Mugabe’s ZANU, primarily led and soldiered by the Shona ethnic group, acquired weapons and funding from China. From the 1990s, China continued to increase economic ties with Zimbabwe; it has investments in mining, agriculture, energy, and construction. In 2015, China became Zimbabwe’s top export market and accounted for by far the largest share of foreign direct investment into Zimbabwe (74 percent). The same year, China also promised a $4 billion aid and investment package in 2016, and has pledged $46 million for the building of Zimbabwe’s new parliament building.

China’s ties with the Zimbabwean Army, from which the Lacoste faction draws its strength, are particularly deep. It has sold weapons ranging from small arms to fighter jets and, in an almost symbolic culmination of these ties, China financed the building of Zimbabwe’s new National Defense College, which trains both defense and internal security forces. A parallel aspect of these arms sales, however, has been the alleged diverting of revenues from Zimbabwe’s Marange diamond fields, in which the primary investor is China’s Anjin Investments.

The diamond mines were, in fact, the source of China’s increasing concerns about the Mugabe regime’s indigenization policy, which required 51 percent local ownership of foreign businesses. Although the two Chinese companies, Anjin and Jinan, began operations in 2012 with 51 percent of shares owned by Zimbabweans, the Zimbabwean government integrated them into the state owned Zimbabwe Consolidated Diamond Company (ZCDC) in 2015, which led to vehement public opposition by the Chinese government. The crisis also led to the overall deterioration of China-Zimbabwe relations, and China refused to support Mugabe in his 2016 crackdown on the opposition.

After being ousted from his vice presidency by Mugabe in November 2017, Mnangagwa reportedly fled to China. He had cultivated relations with senior members of the Chinese Communist Party, which allegedly go back to the Rhodesian Bush War when China offered the guerrillas both training and weapons. General Chiwenga also visited China from November 8 to 10, on an official trip organized prior to the recent events. During the visit, he met with Li Zuocheng of China’s Central Military Commission, the organization within the Communist Party that controls defense and security policymaking, as well as China’s Defense Minister General Chang Wanquan. Despite China’s denial of any involvement in the recent coup, and announcement of a “wait and watch” approach, Mnangagwa’s presidency with Chiwenga’s backing from the Armed Forces will assure it a firm grip on Zimbabwean politics and economy, assuring China’s interest in regional stability in met. –The Diplomat/

The Welcome Party: Cross-Strait Relations and Chinese Loans in Africa

Do African countries that switch diplomatic relations from Taiwan to Beijing get a...

[sc_embed_player fileurl=”https://www.pri.org/node/169932/embedded”] “Many of the things that Americans buy in shopping malls are...

In the run-up to the establishment of the port, China has invested heavily...