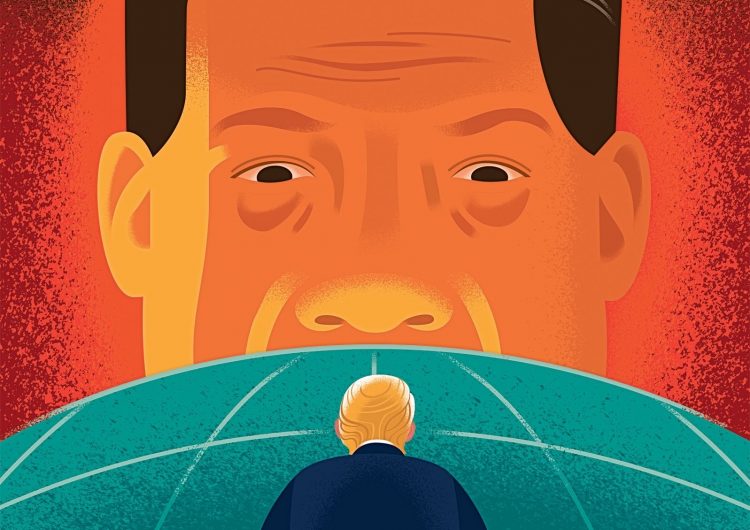 China’s approach is more ambitious. In recent years, it has taken steps to accrue national power on a scale that no country has attempted since the Cold War, by increasing its investments in the types of assets that established American authority in the previous century: foreign aid, overseas security, foreign influence, and the most advanced new technologies, such as artificial intelligence. It has become one of the leading contributors to the U.N.’s budget and to its peacekeeping force, and it has joined talks to address global problems such as terrorism, piracy, and nuclear proliferation

By setting more of the world’s rules, China hopes to “break the Western moral advantage,” which identifies “good and bad” political systems, as Li Ziguo, at the China Institute of International Studies, has said. In November, 2016, Meng Hongwei, a Chinese vice-minister of public security, became the first Chinese president of Interpol, the international police organization; the move alarmed human-rights groups, because Interpol has been criticized for helping authoritarian governments target and harass dissidents and pro-democracy activists abroad.

By some measures, the U.S. will remain dominant for years to come. It has at least twelve aircraft carriers. China has two. The U.S. has collective defense treaties with more than fifty countries. China has one, with North Korea. Moreover, China’s economic path is complicated by heavy debts, bloated state-owned enterprises, rising inequality, and slowing growth. The workers who once powered China’s boom are graying. China’s air, water, and soil are disastrously polluted.

And yet the gap has narrowed. In 2000, the U.S. accounted for thirty-one per cent of the global economy, and China accounted for four per cent. Today, the U.S.’s share is twenty-four per cent and China’s fifteen per cent. If its economy surpasses America’s in size, as experts predict, it will be the first time in more than a century that the world’s largest economy belongs to a non-democratic country.

For decades, China avoided directly challenging America’s primacy in the global order, instead pursuing a strategy that Deng, in 1990, called “hide your strength and bide your time.” But Xi, in his speech to the Party Congress, declared the dawn of “a new era,” one in which China moves “closer to center stage.” He presented China as “a new option for other countries,” calling this alternative to Western democracy the zhongguo fang’an, the “Chinese solution.”

Re: President Drumpf, Russel spoke to Chinese officials after the Mar-a-Lago visit. “The Chinese felt like they had Drumpf’s number,” he said. “Yes, there is this random, unpredictable Ouija-board quality to him that worries them, and they have to brace for some problems, but, fundamentally, what they said was ‘He’s a paper tiger.’ Because he hasn’t delivered on any of his threats. There’s no wall on Mexico. There’s no repeal of health care. He can’t get the Congress to back him up. He’s under investigation.”

Joseph Nye, the Harvard political scientist who coined the term “soft power,” to describe the use of ideas and attraction rather than force, told me that China has improved its ability to persuade—up to a point. “American soft power comes heavily from our civil society, everything from Hollywood to Harvard and the Gates Foundation,” he said. “China still doesn’t understand that. They still haven’t opened that up. I think that is going to hurt them in the longer term.” Nye predicts that Drumpf’s unpopularity will not erase America’s soft-power advantage, except under certain conditions. “Probably he won’t be seen as a turning point in American history but will be seen as a blip, another one of the strange characters that our political process throws up, like Joe McCarthy or George Wallace,” he said. “Two things could make me wrong. One is if he gets us into a major war. The second is if he gets reëlected and winds up doing damage to our checks and balances or our reputation as a democratic society. I don’t think those are likely, but I don’t have enough confidence in my judgment to assure you.” –The New Yorker/

For more, listen to to the Evan Osno’s Fresh Air Interview.

Chinese electric car manufacturer BYD on Saturday signed an agreement to open a...

Africa Is Inspiring These Chinese Transplants To Reflect On Their Culture

I spent time with four Chinese transplants living in four African countries, to...