Behind Wolf Warrior II’s parochial portrayal of Africa and plot inundated with sounds of gunfire, lies a cultural jewel that makes the two hour and six minute film worth sitting through. That is, a window into the State psyche around what “the great restoration of the Chinese nation” may look like. Having passed through the mandated channels of ministries like The State Administration of Press, Publication, Radio, Film and Television (SAPPRFT), Wolf Warrior II offers detailed insight into a national image that is congruent with present-day Party lines and pleasing to China’s top members of leadership.

The film provides the “Chinese imagination” with a fantastic and heroic picture of the Middle Kingdom reclaiming its rightful place at the center of international order. Set in, Africa, a traditionally Western sphere of influence, Leng Feng, the chief protagonist and emblem of China, challenges and is victorious in the struggle against American hegemony, embodied by his arch nemesis, Big Daddy.

The film makes no allusions to shattering the asymmetrical power structures that normalize the underdevelopment of African societies. In fact, the cinematic structure of the movie is evidence that China’s rejuvenation (复兴, fuxing) is primarily about supplanting White supremacy and not saving the Global South from it. The appropriation of the white-savior narrative corroborates this observation. From the outset of the film Wolf Warrior II reproduces culturally violent tropes transplanted from Western classics like, Joseph Conrad’s Heart of Darkness –the most obvious being its setting in a disease ridden, war-ravaged and helpless unnamed African country.

There is also the prominent motif of “us and them.” Whether it was when African civilians were discouraged from seeking refuge at the Chinese embassy, or when Leng Feng’s black “adopted” son was almost prevented from boarding a Chinese rescue naval vessel, or when the factory owner initially opted to evacuate only his Chinese employees, the message was clear. China intends to continue the tradition of delineating the world along racial and national identity lines. The major difference in a Pax Sinica is that now, Chinese people can expect to be beneficiaries from racial discrimination.

However, the moment that best encapsulates China’s vehemence to building a “rich country and strong army” (富国强兵, fuguoqiangbing) that eclipses those of the Anglo- saxon variety, was in the final battle scene between Leng Feng and Big Daddy. What ultimately, moves Leng Feng to the state of rage, seemingly necessary to overcome the villain, was a single provocation uttered by the American mercenary: “People like you will always be inferior to people like me.” This was a crude and almost comedic moment when social Darwinistic politics between a diminishing power and a previously, humiliated one finally collided.

At its core, Wolf Warrior II is ultimately a story about power that tugs on the nationalistic heartstrings of its domestic audience to legitimize China’s rise as positive, humane, and beneficial activity for the world.

The question that lingers for the outsider is whether China’s “peaceful rise” is contingent upon continued decline in the Global South. Wolf Warrior II gives the onlooker pause to believe that China’s quest for “wealth and power,” (富强, fuqiang) through overseas infrastructure investments and experience- based military training, may indeed be predicated upon the chaos and dysfunction of the nations it claims to help. Through this lens the movie paints a picture whereby the realization or chengqian qihou jiwang kailai (承前启后继往开来) of the “Chinese Dream” is a rather frightening reality punctuated by proxy wars and systematic exploitation of non-Han Mandarin speaking peoples.

Interestingly, fundamental conflict of interest was a defining characteristic of America’s empire building at the turn of the twentieth century. In the Spanish-American war, the United States’ fight against Spain had been justified as a noble crusade against a corrupt imperial power that trampled on basic human rights.1 In 1898 the war ended with Spanish defeat and America’s acquisition of formal and informal colonies stretching from Cuba and Puerto Rico in the Caribbean to Guam, Hawaii, and the Philippines in the Pacific.2 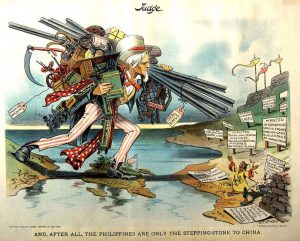 This victory engendered new notions of American pride, prospects, and power that in places like the Philippines manifested in egregiously oppressive ways. Domestic debates ensued worrying that the United States would become the monster it sought to destroy. But with the subsequent completion of the Panama Canal in 1915 –an internationally recognized herculean display of strength over nature and man– Americans began believing it their moral obligation to uplift backward (non-White English speaking) societies on the basis of economic progressivism and cultural superiority.

From the view of imperial history, it is not too hard to see the parallels between last century’s America and the People’s Republic of China of today. China’s maritime provocations in the East and South China Sea alongside the rolling out of the Belt and Road Initiative only strengthen its association to its American competitor. In this context, Wolf Warrior II should prod nations of the Global South to contend with the fact that the prospects for enjoying greater degrees of agency under Chinese world leadership are anemic at best. It is more reasonable to expect and thus prepare for the persistence of economic disenfranchisement and systematic racism that has been consubstantial to the imperial enterprises of the past.

Despite how unappealing and unjust this reality may be, the Global South is nonetheless a witting historical actor that can either choose to reinforce China’s “Wolf Warrior narrative” or question it. Citizens of the Global South ought to keep in mind that while being on the margins of the world has dire consequences, being incorporated into a Sinosphere has serious implications as well, and thus demands its utmost scrutiny and perhaps resistance.

Hodan Osman Abdi swiftly strings together a few phrases to describe herself: a...